All what you need to know about Cuban Cocktails

Cuba is one of the most famous countries in terms of music, style, sun, beach but even more for the exquisiteness of its cocktails.

Which has been the result of Spanish, Caribbean and African influences, which combined are something very delicious.

Many of them have achieved international recognition, but the taste is indisputably better when you drink in your country of origin.

That is why everyone who visits Cuba is amazed and eager to return to their bars and restaurants.

If you are interested in this world of Cuban cocktails, I recommend that you continue reading.

Here you will find what is necessary for the preparation of those drinks so known in  the island.

Ingredients and  Preparation of:

Favorite cocktail of millions of Cubans especially in this hot season for its unparalleled freshness and flavor.

Its emergence dates back to the 16th century, known at that time under the name “ El Draque”, in honor of a slave merchant, named Francis Drake.

This drink can be found in all the menus of bars and restaurants in the country, so you will not have difficulty finding it.

But the place of predilection for all is “ La Bodeguita Del Medio”.

Bar-Restaurant located on Calle de Empedrado No. 307 in Cuba and San Ignacio, a few blocks from the Malecon, in Old Havana, specifically halfway down the street as you might say.

This illustrious drink of Bodequita requires the following ingredients for its preparation:

One of the best cocktails for the summer!

Originally from Santiago de Cuba, the eastern region of the island, it is one of the most famous drinks in the country along with mojito and Cuban rum.

It is a very versatile drink, being able to be used in any type of situation.

Different ingredients, especially fruit, can be used for its preparation.

But the one that has truly gained international fame is mixing in one of the most famous bars in the world, Bar Floridita, where Ernest Hemingway took them regularly. As stated by Ernest Hemingway himself:

This cocktail emerged in the city of Havana.

But it was not until the 20s and 40s that it became popular.

It was invented in honor of the Cuban president Gerardo Machado, becoming from then on the preferred cocktail for the upper class of that time.

Currently there are many Cubans and tourists from all over the world who delight in this tasty cocktail.

For its preparation the following ingredients are required: Many change the dry vermouth for red and many others usually add the trickle of grenadine at the end, but this is a matter of taste.

In the yearIn 1912, the American billionaire Henry Flagler built a railway route which he called “The Havana Special”.

Whose route connected the city of New York with Miami and then extended throughout the keys of South Florida to reach Key West.

At this point, the trains were sent to Havana, where they then continued their railway journey to the city of Santiago de Cuba.

This fact caused thousands of American tourists to arrive to Cuba constantly.

As it was an extensive day, and the tiredness a lot of tourists visited important places, among them the Floridita bar, but not only with the objective of resting but also of taking some Cuban drinks.

At that time the owner of El Floridita, Constantino Ribalaigua, created this cocktail with the aim of enchanting with its flavor all the tourists of that route so that on returning from the east, they would go back to their bar. This drink was invented around 1900.

According to rumors, after the Spanish-American war, soldiers met frequently at the military base of the city of Havana to enjoy this drink, which would later become famous under the name Cuba Libre.

It is said that they began to mix soda cola with Cuban rum and lime and when offering they exclaimed: “Viva Cuba Libre!”, Hence the name.

However, we could not speak of liberation, since at that time the island was, instead of under Spanish rule, under US domination. That is why Cubans in exile call this drink “little lie”.

You do not need many ingredients: The basic recipe is the following:

The glass can be decorated with slices of lime it is very important that the limes are fresh, since these are the ones that give a special touch to the cocktail, the concentrates should be used only in case of emergency. Nor should you miss a sorbet and the drink You must have enough ice.

It is a cocktail that emerged in the eastern region of the island during the period of independence wars against Spain.

His name is clearly Cuban, without foreign influence that announces Cubanness.

It is considered a symbol of the city of Trinidad.

Formerly served in a güira (rounded and hard fruit when dry) or in a container made of dried coconut.

Today it is served in small clay pots, whose shape resembles that of güira or coconut, which are also sold as souvenirs. 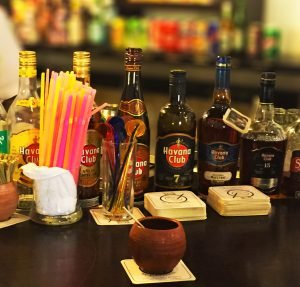 This cocktail is classic in Cuba, although it is not originally from the country, but was created in Puerto Rico.

It is often dense and creamy in consistency. As with the daiquiri, there are variants of this cocktail: with golden rum instead of white, with condensed milk, etc.

The presentation varies considerably from one place to another, although a more attractive presentation does not always imply better flavor.

It is the maximum to refresh in the intense heat of Cuba. Serve the pina colada cocktail in a glass and decorate it with natural fruit, with the leaves of the pineapple or with a candied cherry. It is also very good to add a little currant or grenadine on the walls of the glass and then serve the drink.

Here you have the main Cuban cocktail,are you ready to prepare some?