Exploring the Ciénaga de Zapata is an adventure.

Of the many natural attractions that a country like Cuba has, the Ciénaga de Zapata, in the province of Matanzas, is one of the most significant.

Reason why it is visited day after day by millions of Cubans and foreigners from all over.

The reason for these visits is not only enclosed in the natural framework, that is, because it is the largest wetland in the Caribbean declared by UNESCO as a biosphere reserve, or because it has one of the largest crocodile farms in the world and with a large number of of endemic species ..

But also because in this area the famous Bay of Pigs invasion was made one of the great events in the history of the island.

I invite you to keep reading so you know about this beautiful site. And if at any time you decide to visit, I can guarantee you will not regret it.

Where is the Ciénaga de Zapata? La Ciénaga de Zapata is located in the southern part of the province of Matanzas.

It covers more than 4300 square kilometers, including the Zapata Peninsula and an extensive area east of the Bay of Pigs.

How to get to Ciénaga de Zapata and how far is it from Havana and Varadero?

To the Ciénaga de Zapata you can go by car, taxi, bus or take an organized excursion that depart from Havana and Varadero.

Although it can be reached from other parts of the country.

From Havana the journey by car is about 2 hours.

Since it is halfway along the route that leads to Cienfuegos and Trinidad, the Ciénaga de Zapata area is also a great option to make an intermediate stop when you are going to visit one of those two cities, and so the way do not become so tedious.

From Varadero the journey lasts 1 hour.

If you want to go by buses (buses) Viazul you should know that there is no direct line Viazul that goes to the Ciénaga de Zapata or Playa Larga.

The disadvantages of going to the Ciénaga de Zapata in Viazul, is that the bus trip is especially long.

From Havana the trip can last between 3h 30 and 4h 30 minutes, and from Varadero

On the other hand, you must pay the full ticket price, whether you leave Havana or leave from Varadero, you will have to pay 17 or 28 €, respectively, even if you get off before reaching that destination.

In my opinion it is much more practical and somewhat cheaper to choose to take a collective taxi, whether it departs from Havana or from Varadero.

One of the biggest advantages of the collective taxi is that it will pick you up and drop you off at your accommodation in the Ciénaga de Zapata area.

Therefore, you will not have to take any additional transportation as it happens in the case of the Viazul bus.

In addition, with the collective taxi it takes less to make the trip.

The price of the collective taxi may vary.

The normal thing is to pay about 150 CUC per person from La Havana; something less if you leave from Varadero.

In the end it is cheaper because you do not have to take any other transport to reach your destination.

If you decide to rent a car, just put the GPS on your mobile and you’re done.

And let yourself be guided by the instructions.

But you should know that it is not the cheapest option.

In fact, rents are quite expensive, while collective taxis, buses and other alternative transports are generally cheaper.

Where to book the trip to the Ciénaga de Zapata?

Both in Varadero and in Havana you will find drivers who will offer you transportation.

Talk to them, ask, always negotiate the price before starting your trip.

Do not worry about not taking it booked from home; You will not have any problem to look for transportation directly in Cuba, where you will also get better prices.

The only thing to keep in mind is that, the day before the date when you want to go to the Ciénaga de Zapata, you should look for transportation and then do not complicate it. 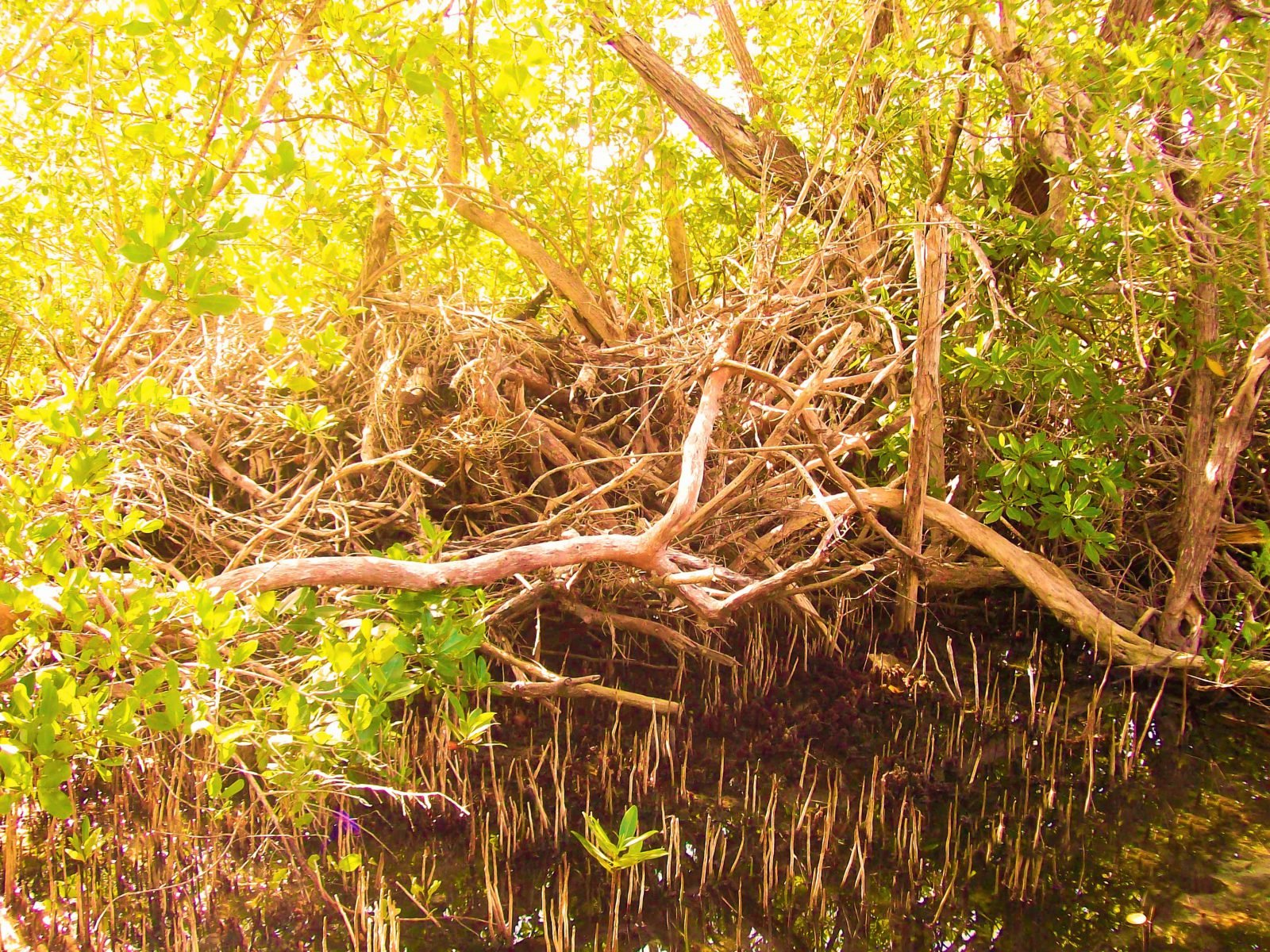 The Ciénaga de Zapata is mostly included in the Great Natural Park of Montemar, which brings together great tourist attractions, both natural and historical.

It is the largest wetland in the insular Caribbean region, being an area relatively little modified by man.

It is one of the most important forest areas of Cuba.

As well as diverse species of fauna among which stand out the crocodiles, manjuarí (fossil fish) and birds.

Hence, it was declared in the year 2000 as a reserve for Biosphere, one of the six in Cuba.

The Ciénaga de Zapata is the largest reservoir of migratory birds in Cuba.

Among the fish species undoubtedly the most interesting is the manjuarí, practically a living fossil that only inhabits the Ciénaga de Zapata.

What to see in the Zapata Peninsula?

There are many things that can be seen in the Ciénaga de Zapata, but without doubt these are the most significant:

Located almost at the entrance of the Ciénaga de Zapata road and the National Highway, this site tries to recreate to a certain extent the rural environment of the island.

It is a nice place to have one of the best espresso and cappuccino you can find.

Here you can see some majaes, jicoteas, manjuaríes (a prehistoric species of native fish from the Ciénaga de Zapata), and other examples of the Cuban fauna, as well as several typical specimens of Cuban flora.

It is practically an almost inevitable stop for the traveler.

Combination of restaurants (La Boca and Colibrí), shops, bar, jetty with destination to Villa Guamá in the heart of The Treasure Lagoon.

There is a crocodile farm as well as jicoteas and manjuaríes. 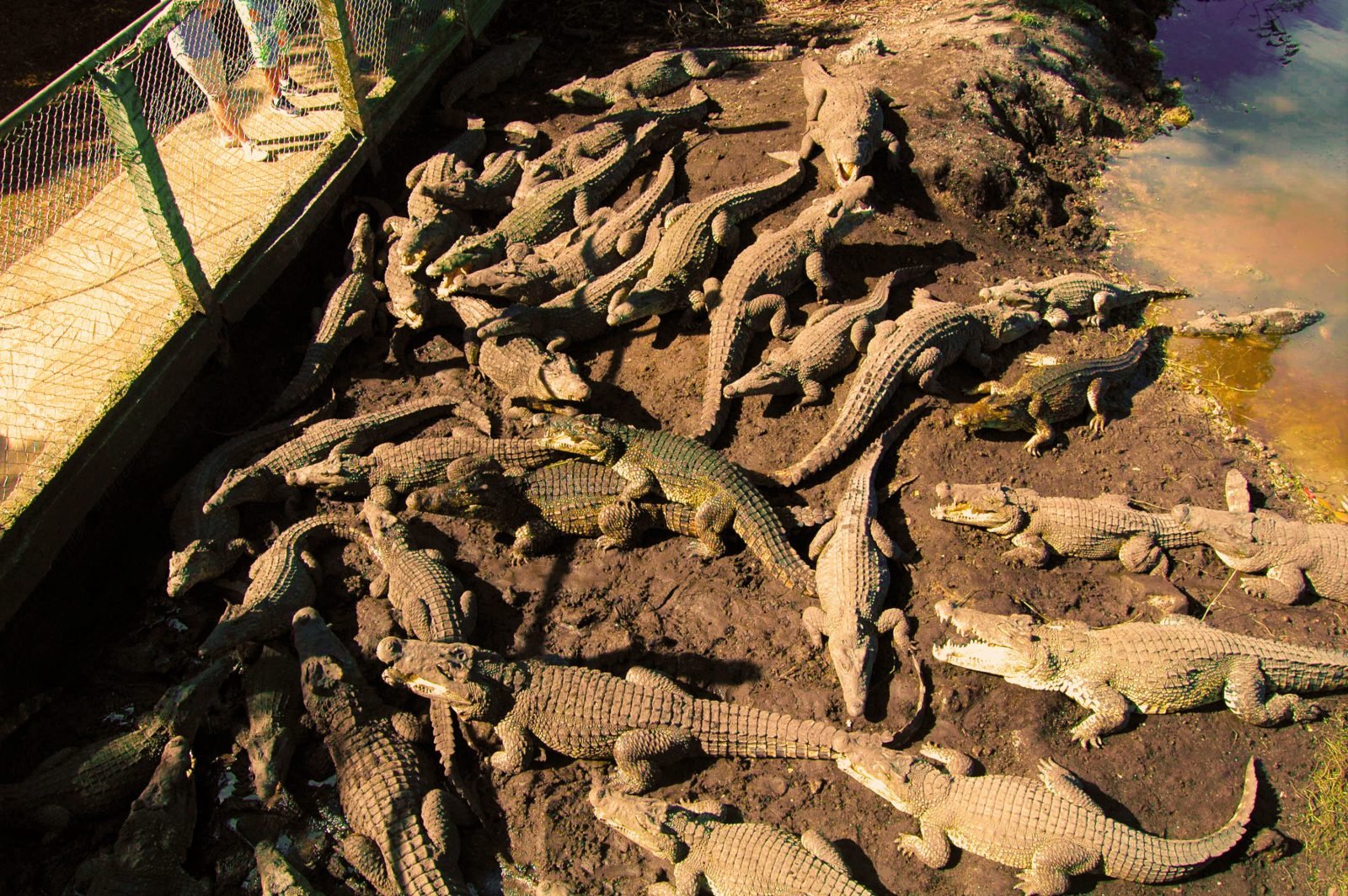 In addition to beautiful natural landscapes.

Located in the Ciénaga de Zapata Oriental, it is one of the largest bodies of fresh water on the island.

Its crystal clear waters are renowned for its population of trout, widely used in exquisite Cuban dishes.

Being the ideal place for those who love nature because of the large population of birds that exist, especially in the hours of sunrise and sunset.

Located almost at the southeast end of the The Treasure Lagoon is the village.

Built on a group of small islands connected to each other by wooden bridges.

Hence, they can only be accessed by boats and motor boats along the Laguna Channel.

It is a recreation of the most advanced indigenous culture of Cuba (the Taíno), with life-size sculptures of aborigines carrying out daily activities typical of their culture (fishing, hunting, domestic chores).

With the aim of showing the world the way of life that existed at that time before the arrival of Christopher Columbus in America. 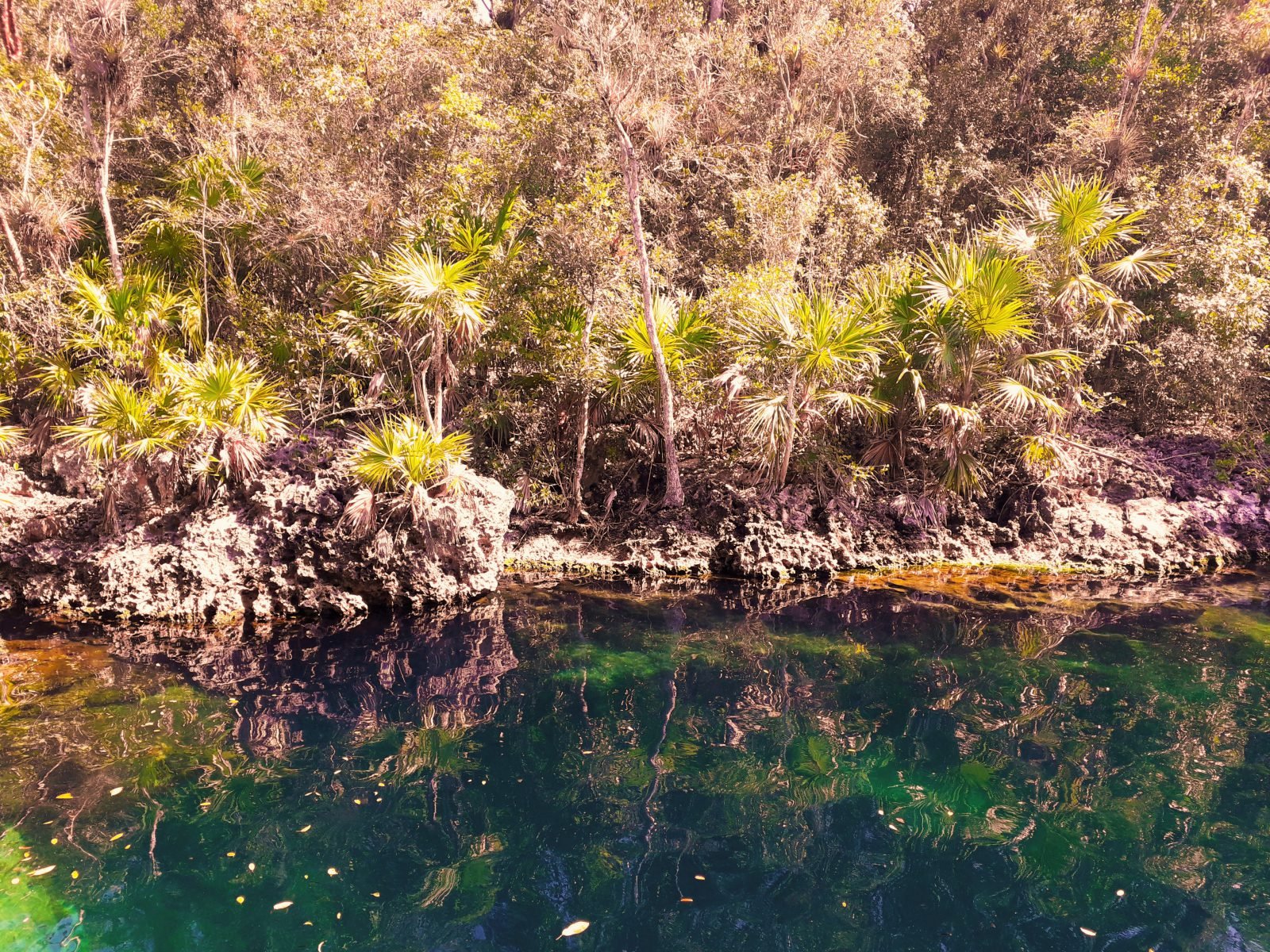 Another interesting place in the Ciénaga de Zapata is its famous Cave of the Fishes.

.It is a kind of cenote located on the same coast, the product of a cavern flooded by the sea whose roof collapsed in a geological past.

It has around 70 meters of depth, practically vertical banks and crystalline waters embellished by the colors of the fish that live there. 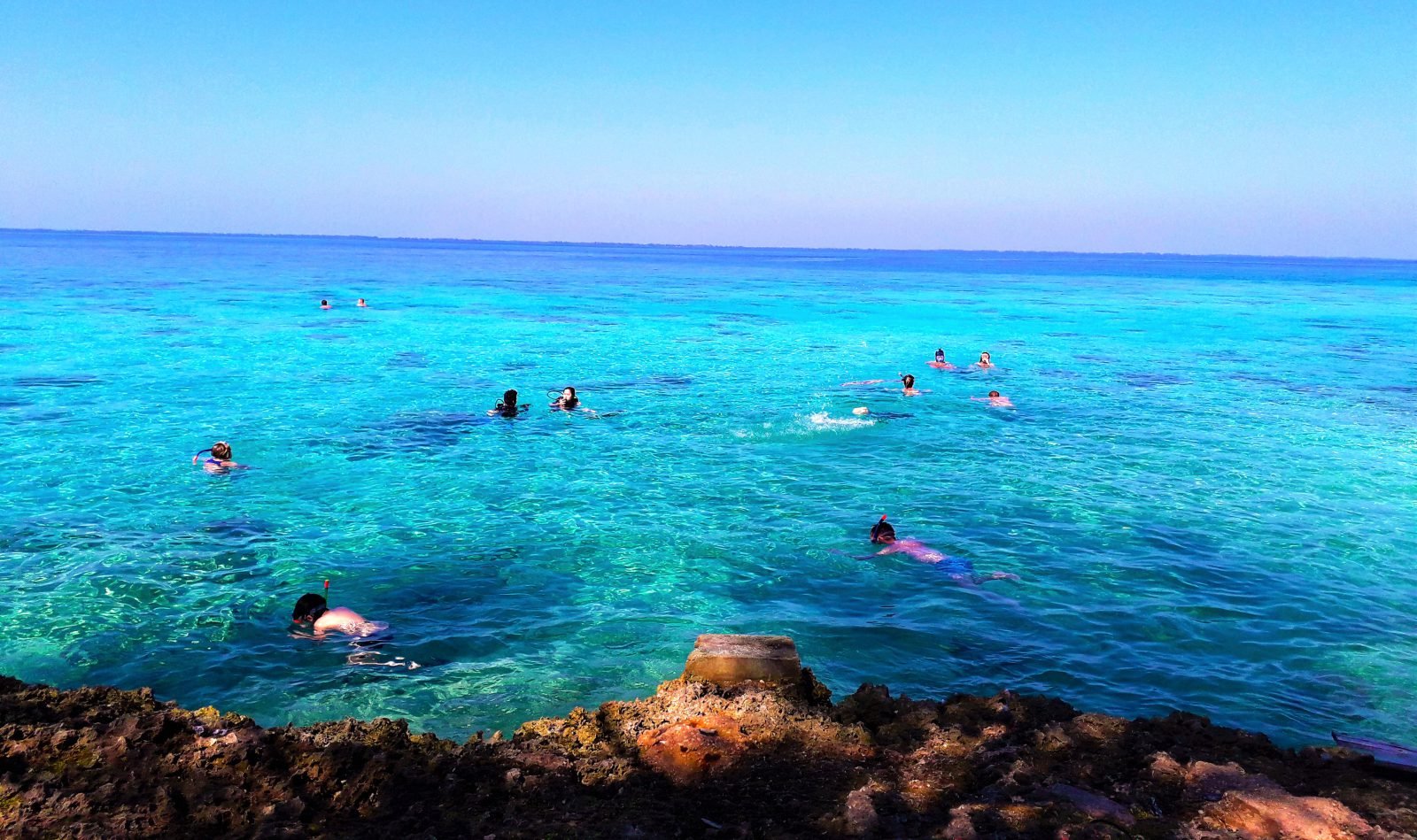 In addition to various corals as well as shipwrecks.

Hence, it is the perfect place for snorkeling and diving. 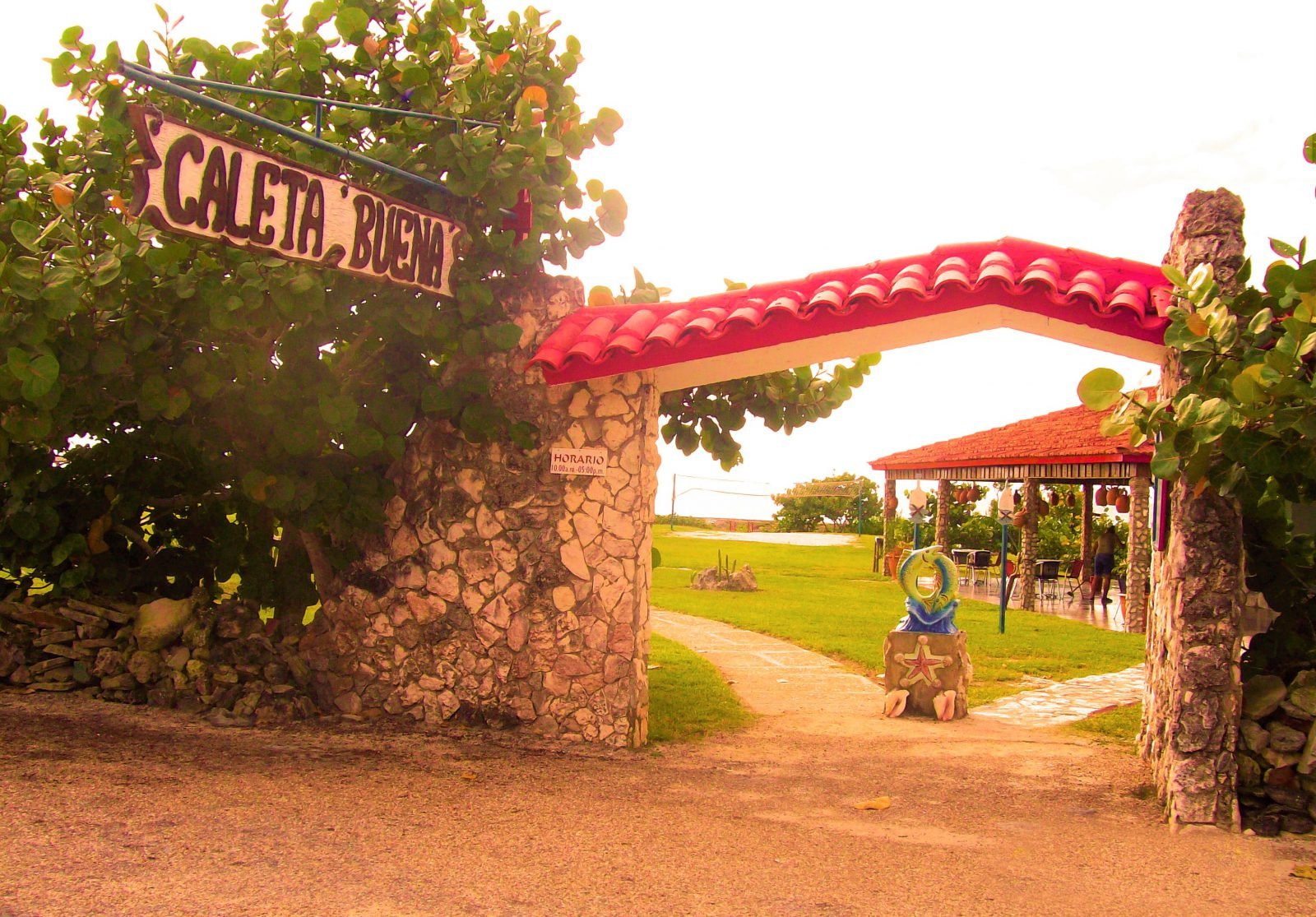 Something similar to Cave of the Fishes occurs 8 km southeast of Girón Beach in Caleta Buena.

A cove with good conditions for a day at the beach and snorkeling and diving.

It has the El Pirata International Diving Center, with 19 immersion points, with depths up to 25 meters, and practice diving in the cenotes and flooded caves that abound in the environment. 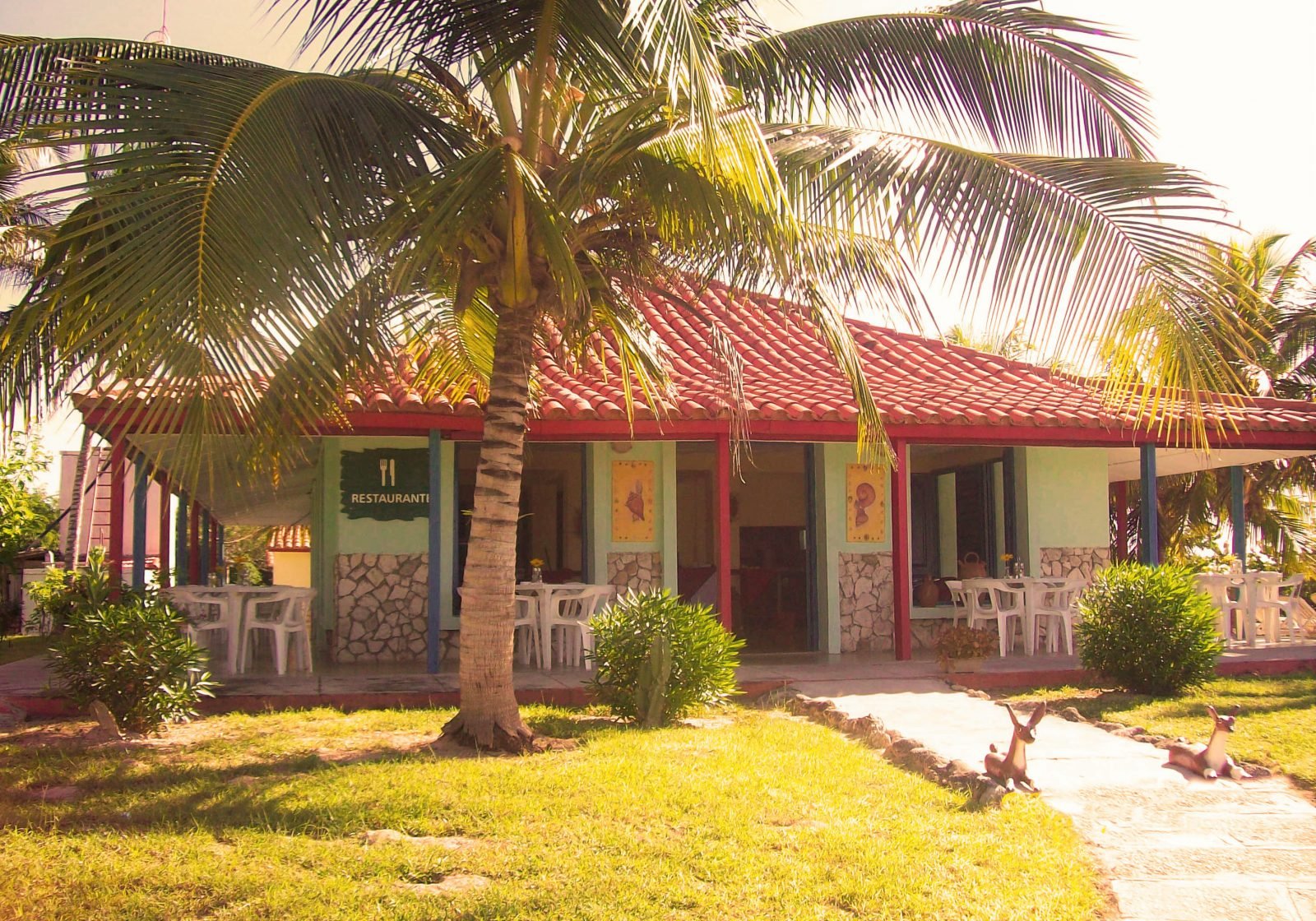 The Ciénaga de Zapata has the best beaches in the south of the island.

Among them, Long Beach stands out.

Located 11 km south of Mouth, at the northeast end of the Bay of Pigs.

It is an ideal destination for resting, enjoying the beach, snorkeling or diving.

In it lies the central office of the Zapata Swamp National Park and in the Northeast there is the International Bird Observation Center, in a particularly good area for bird watching. 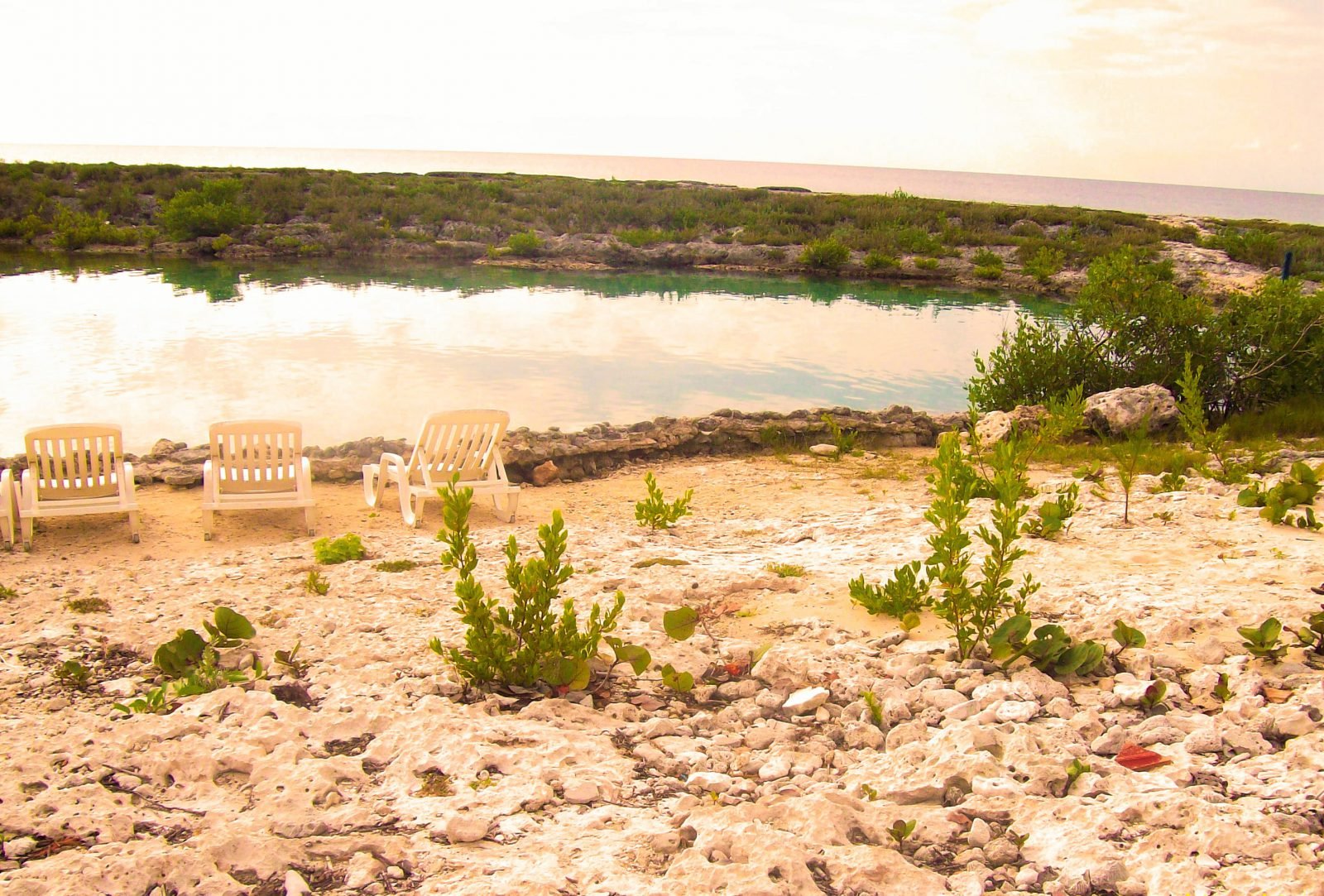 At about 34 km away from Long Beach, Girón Beach is located at the eastern entrance of the Bay of Pigs.

Its name recalls the pirate of French origin Gilbert Girón who took refuge in the area in the seventeenth century.

Here there is a hotel and the International Blue Diving Center and you can also go hiking, bird watching and speleotourism.

There is also a museum dedicated to the invasion of the Bay of Pigs or invasion of Girón Beach, which took place in April 1961.

Which has 3 rooms with weapons, photographs of the combats and the fallen.

On its exterior there is a Sea Fury fighter plane and a war tank, used in armed clashes.

I hope it has served as a guide.