"My mojito in La Bodeguita, my daiquirí in El Floridita". | Havana 60

Visiting Havana and not enjoying a tasty daiquiri in El Floridita or a refreshing mojito in La Bodeguita Del Medio, is a total mistake for anyone who wants an atmosphere of glamor and cubanía.

As stated by Ernest Hemingway himself:

Ingredients for its preparation.

Ingredients for its preparation. 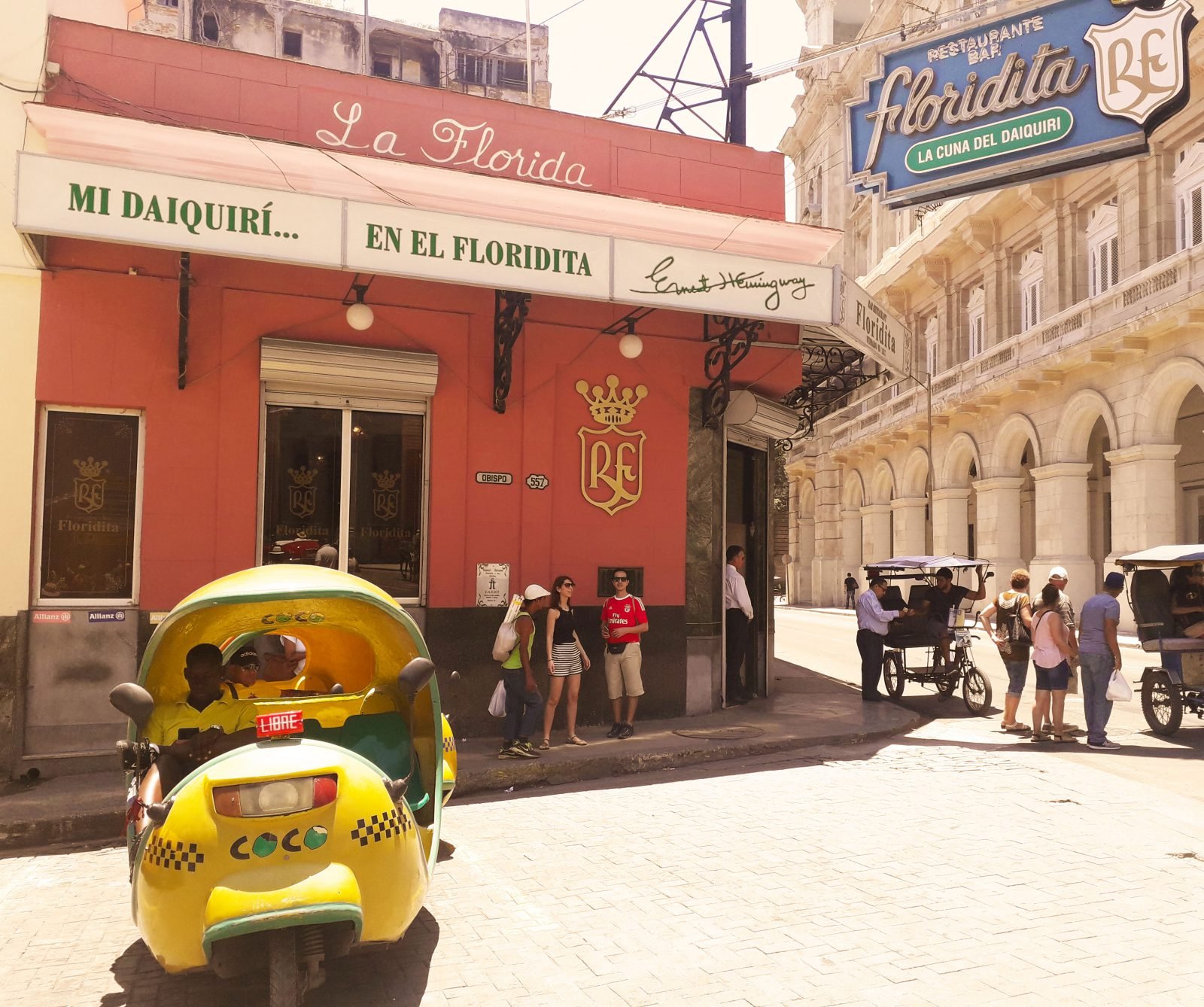 On the corner of Obispo and Monserrate in the heart of Old Havana a couple of blocks from the Capitol opened its doors in 1817 the Floridita bar.

In its beginnings, it was known as La Piña de Plata, then La Florida and finally it was awarded the designation El Floridita.

In 1914, under the name La Piña de Plata, the Catalonian Constantino Ribalaigua Vert (Constant), a Spanish immigrant, entered as a bartender, who brought the daiquiri for the first time to Havana, a drink that would have been born in the interior of Cuba.

Already by 1918 product to his excellent professionalism, smiling treatment and respect towards the multitude was granted him the property of the place but already under the definitive name, Floridita.

In the ’30s, Hemingway settled in the Ambos Mundos Hotel, a few blocks from Floridita, a bar that became very common and where he used to drink daiquiri almost every day.

They say that one day the writer asked Constante for a stronger drink.

This is the origin of Papa Doble, a drink exclusively made for the North American, which is distinguished by doubling the amount of rum and using grapefruit.

Of the Double Pope Hemingway would say: «I am drinking glory».

Reason why he usually traveled from Finca Vigía, located on the outskirts of Havana, to the capital since for him that was “the best bar in the world”.

The Floridita constitutes a permanent tribute to Hemingway, with an exhibition of photographs of the writer with his friends (almost all accompanied by a Double Pope).

But the most striking thing is a sculpture made by José Villa Soberón of normal size bronze located in his favorite corner inside the bar, where he sees himself leaning on the bar.

In addition to all this plot of history that is reflected just by entering the bar, and by its distinguished cocktails; It has the most elegant and exclusive restaurants in Havana.

It offers the best dishes based on seafood and fish, prepared by experts in International and Cuban cuisine.

Attended by an excellent team of work and prestigious musical groups to the Cuban rhythm.

It is not the only bar called this way.

In England there is the Floridita London bar, in Spain the Floridita Madrid, and in California, the United States, El Floridita Restaurant, which emulate the Cuban atmosphere of its homonymous Havanan, with its “perfect blend of cubanía”.

El Floridita has received international recognition, as one of the 7 most famous bars in the world, and the Best of the Best Five Star Award from the American Academy of Gastronomic Sciences as the King of the Daiquiri and Restaurant specialized in fish and seafood more representative .

This bar-restaurant has received famous personalities in all these years, including:

Within your menu menu we can highlight:

This is a hot appetizer very requested. Made from a seafood velouté (flour, butter, nutmeg, seafood smoked, cream and tomato sauce)

Seafood was among Hemingway’s favorites. That is why Floridita has made this dish in his honor. The lobster, the shrimp and the fish are part of it. In it you can savor that touch of the Caribbean that Hemingway enjoyed so much.

It is one of the most requested dishes of Floridita for its presentation and flavor. It consists of shrimps seasoned with lemon juice, salt and pepper.

His name is an allegory to the Ambos Mundos hotel, located almost

end of the famous Obispo street, very close to the Floridita, where Hemingway was staying, and that perhaps, thanks to its proximity, began to frequent this restaurant.

It’s an ice cream cake with different layers and flavors covered in meringue that recreate the “Nieves del Kilimanjaro”, one of Hemingway’s works. It flames in front of the customer with mint liqueur and Havana rum.

The Daiquiri is an equal mixture (cocktail) of Havana Club Silver Dry rum and lemon juice or criollo. Many other variants exist of this drink, but the perfect mix, the one of world-wide fame is that of El Floridita. 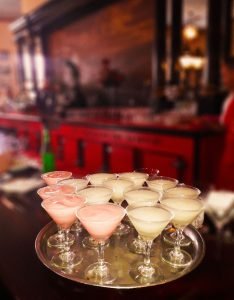 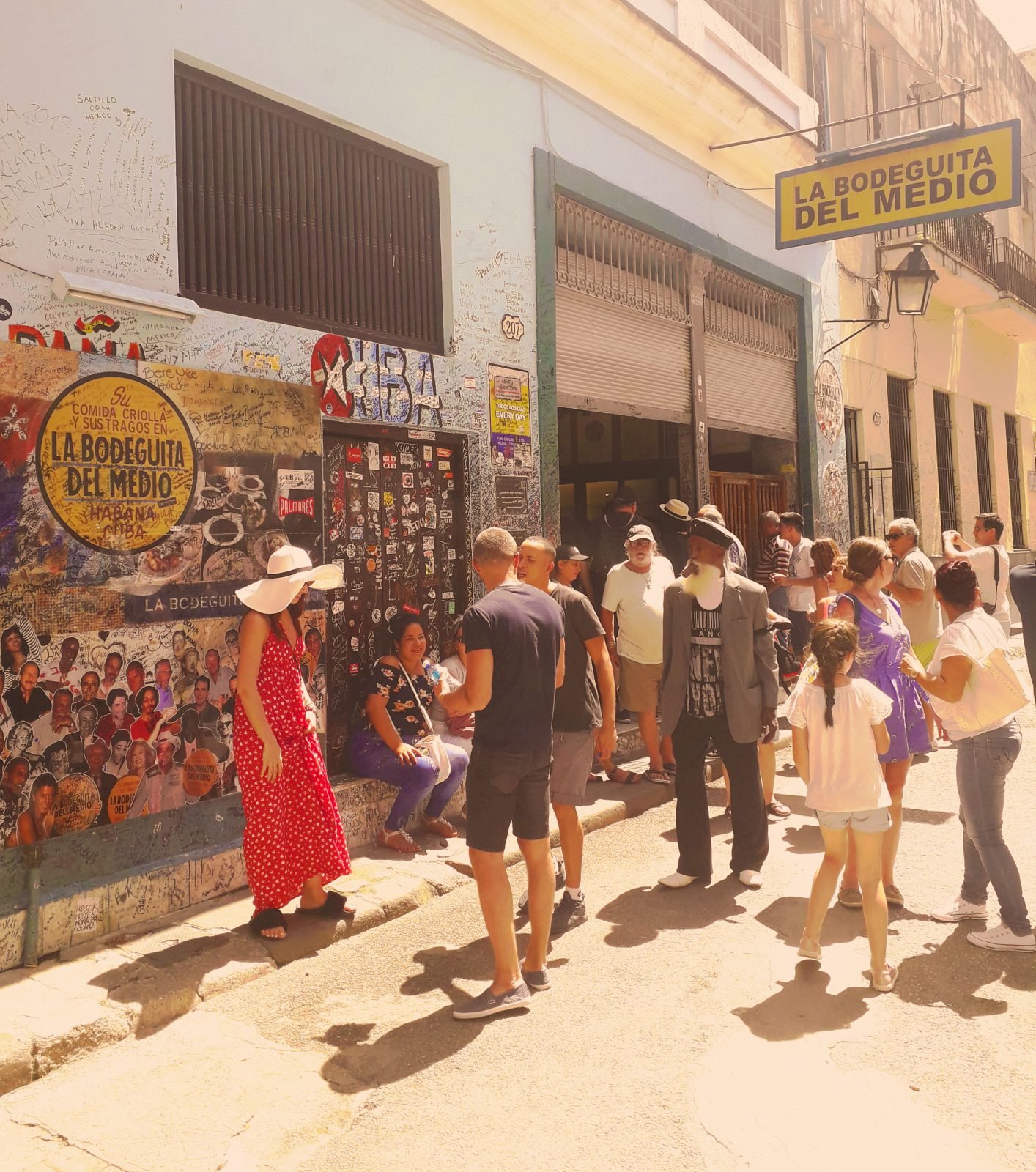 It is located in Empedrado Street No. 307 e / Cuba and San Ignacio a few blocks from the Malecon, in Old Havana, specifically halfway down the block as its name would say.

Before being a bar and restaurant, in 1942 under the name La Complaciente was just a small “bodega” where typical products were sold and people went with their friends.

Then he adopted the name of Casa Martínez.

Traditionally the “bodegas” were located in the corners, but this one unlike the rest, was in the middle of a street. Hence, in 1950 it was given the name “La Bodeguita del Medio”.

It is characterized by an atmosphere of the 50s, stools, rustic tables and walls marked with the signature and phrases of all that has happened there, along with photos of the most illustrious characters that Bodeguita went to taste its flavor and all to enjoy a Mojito.

Here have passed characters such as:

For its good taste in food and drink Mojito has been replicated in Argentina, Costa Rica, Bolivia, France, Mexico, Colombia, Venezuela, Germany, and the United Kingdom.

As the Cuban national poet Nicolás Guillen refers to in his poem:

“ La Bodeguita is already the bodegona. ”

Apart from the legendary Mojitos, you can enjoy typically Creole dishes such as black beans, pork legs, yucca with mojo, white rice, rillettes and tostones.

It is important to mention that if you want to eat you must book in advance as it is usually full.

If you only go for the Mojitos, you can arrive at any time.

The Mojito, is prepared with Cuban rum Havana Club Silver Dry, white rum specifically created for cocktails, rather dry and unlike the old does not change the taste of the cocktail allowing the grass and lemon to be fully savored. 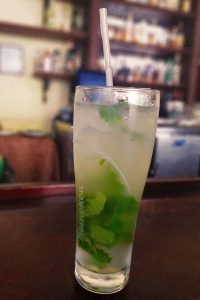 On very hot days, you already know that:

The best place in the world to cool down with a tasty mojito is La Bodeguita del Medio, where he was born some 70 years ago and from where he launched himself into the world with Hemingway.

But the same fame course is the Daiquiri in El Floridita.

You will not regret.